The Revised6 Report on the Algorithmic Language Scheme

The final versions of the main report, library report, nonnormative appendices, and rationale: 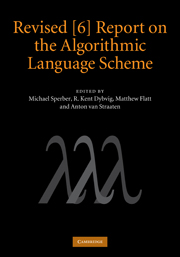 Here is an archive containing all PDF and HTML files, along with TeX and other sources: r6rs.tar.gz

A version of R6RS correcting many of the errata listed is available as a book from Cambridge University press.

To report errors or inconsistencies in the report, please send e-mail to bugs at r six rs dot org.

A list of implementations of R6RS Scheme as well as information about a test suite can be found here.

Informal discussions related to R6RS take place on the discuss@r6rs.org mailing list, which can be subscribed to here.

Information on the process that produced the report can be found here.

The ongoing standardization process of the Scheme language can be found here.